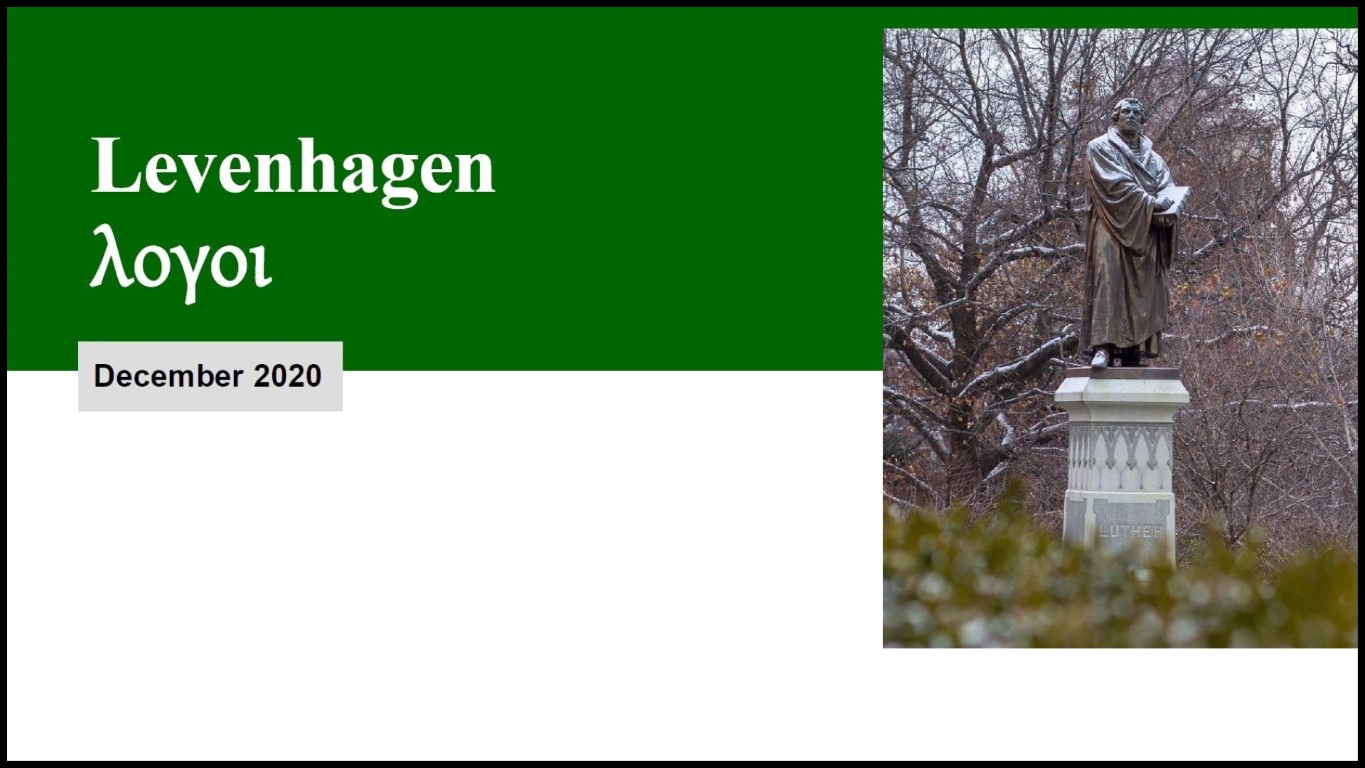 Thoughts from Calvary member Aaron Levenhagen who is currently a student at the St Louis Seminary.

I don’t know about you, but through this Advent season I’ve been feeling weary. Weary of the pandemic. Weary of being separated from extended family and friends. Weary of current events. Even weary of the routine of writing papers and preparing for final exams (maybe that’s just me!). I think the key players in the first Christmas could relate to feelings of weariness….

After one hundred miles of travel over rugged terrain, a young girl, barely into her teens, exhausted and at the end of her strength after hours of slowly advancing labor, collapses to the ground. The gruff and impatient innkeeper had called it a stable, but it was little more than a cave, with dank bits of straw scattered about and a manger in one corner. Another contraction doubles her over, crushing her body in its vise-like grip, tears running down her face. Her husband stands by in clumsy silence, desperate to ease her burden in some way. He looks down helplessly as the quiet of the night is broken by Mary’s cries. He prays the baby will arrive soon. His gentle bride is so…weary.

About a mile away, in the open fields terraced on the rocky Judean hills outside of Bethlehem, weary shepherds were keeping vigil over their flocks. In these same fields during the long-past days of the judges, Naomi and Ruth gleaned grain, desperate to survive. The harvest was over now, and the large flocks were scattered over the hillside grazing in the stubble left behind from the barley harvest. These were the temple flocks, from which would come lambs to be sacrificed on the altar in Jerusalem. It was lambing season which required the shepherds to stay with the flocks twenty-four hours a day, watching over the laboring ewes and the newborn lambs. Unblemished lambs … spotless … born to die. The shepherds were separated from their families, huddling together on a cold night. Bone-tired…weary.

And then, brightness everywhere, like the brightest sun they had ever seen scorching a hole through the canopy of the starlit sky, accompanied by the beating of wings, thousands and thousands of them. Only not just wings, but voices of a heavenly choir, the most beautiful sound they had ever heard. And over the chorus of the greatest song ever sung, a voice like the sound of waterfalls and trumpets: “Don’t be afraid…good news…great joy…a Savior was born for you, who is the Messiah, the Lord…You will find a baby lying in the manger.”

And as suddenly as it began it was over. Blinking and squinting, the shepherds slowly begin to get up from the ground where they fell, dusting themselves off. They look at each other and then first one, and then another, and then every last one of them, weariness forgotten, tore off across the rocky field through a sea of moonlight and starlight toward the town on the next hill.

Skidding to a stop and gasping to catch their breath, the shepherds arrived outside the rocky enclosure. Gently flickering firelight glows from within. Elbowing each other and whispering “Hush!” through gritted teeth, they nervously step toward the opening.

At the first sight of the strangers, Joseph is on his feet reaching for his staff. But before he can ask them their business, one-by- one they fall to their knees. They had found the baby, just as the angel said. With their eyes on the Child, for one brief moment they forgot their weariness and felt … hope. An unblemished Lamb … spotless … born to die … and rise … and save.

Not unlike Mary, Joseph, and the shepherds, many of us find ourselves exhausted, not sure what the future holds. We’re weary of the monotony of isolation. Many of us are separated from families and friends and treasured traditions are going by the wayside for the first time ever. There may be an empty chair at our table, a beloved family member who now at home with the Lord. Christmas may come and all we might feel is that it’s just not the same this year.

But there is hope. In the words of the beloved carol O Holy Night:

A thrill of hope, the weary world rejoices
For yonder breaks a new and glorious morn

There is a hope, a thrilling hope despite the circumstances of 2020. The weary world and the weary people that live in it once again can rejoice. Yonder breaks a new and glorious morn, the Prince of Peace comes again to “all who are weary and heavy laden” and gives rest. True rest and true hope for weary souls.