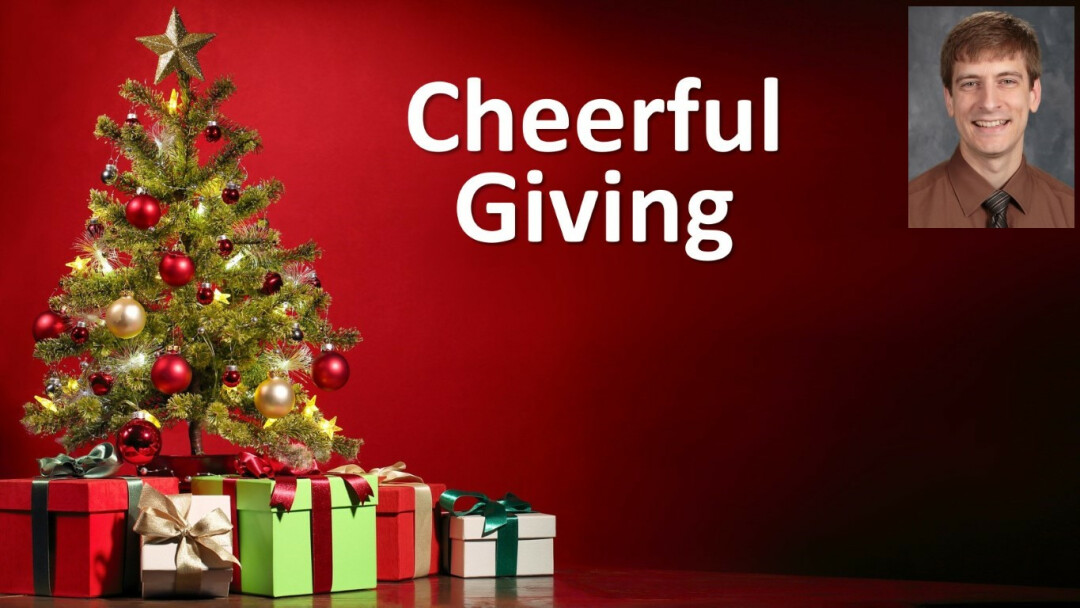 As I sit down to write my December / January newsletter, I can’t help but feel like there’s only one good answer for what I will write. December is a month of giving. January is our stewardship month. And today (as I write this in November), I’m preaching on Giving for the Red Letter Challenge.

I think we have a theme.

Whether or not you attended that service and heard that sermon, it’s relevant to note that I quote many Bible passages on giving in that message. For the sake of time, I didn’t quote them all, but multiple members came up to me to point out one verse in particular that I left out: “The Lord loves a cheerful giver.”

This verse is in 2 Corinthians 9, and though it’s useful by itself, I think we should look at the broader context.

6 The point is this: whoever sows sparingly will also reap sparingly, and whoever sows bountifully will also reap bountifully. 7 Each one must give as he has decided in his heart, not reluctantly or under compulsion, for God loves a cheerful giver. 8And God is able to make all grace abound to you, so that having all sufficiency in all things at all times, you may abound in every good work. 9As it is written, “He has distributed freely, he has given to the poor; his righteousness endures forever.” 10 He who supplies seed to the sower and bread for food will supply and multiply your seed for sowing and increase the harvest of your righteousness.

Paul’s laying out some amazing teaching and encouragement here, but it’s difficult stuff, too. First, a warning—if you sow sparingly you reap sparingly—then, a promise—if you sow bountifully you reap bountifully. Next, Paul makes the controversial statement that we should not give under compulsion or reluctantly! Your giving should be free and cheerful, for three reasons.

One, the Lord loves a cheerful giver. We should give because it makes God happy, just like we give to our kids and loved ones at Christmas time, simply because we delight in their happiness.

What a beautiful passage. What beautiful promises! But I must admit, sometimes it’s hard to trust God when we worry about having enough. This is where faith comes in. As the Lord says in Malachi 3, “Test me in this.” Use the gifts given to you, and see what he does. Each little step of obedience is a movement toward faith. Each step of faith is a movement toward the cheer and even joy which Paul encourages in this chapter. All year long, let’s trust God with our giving!