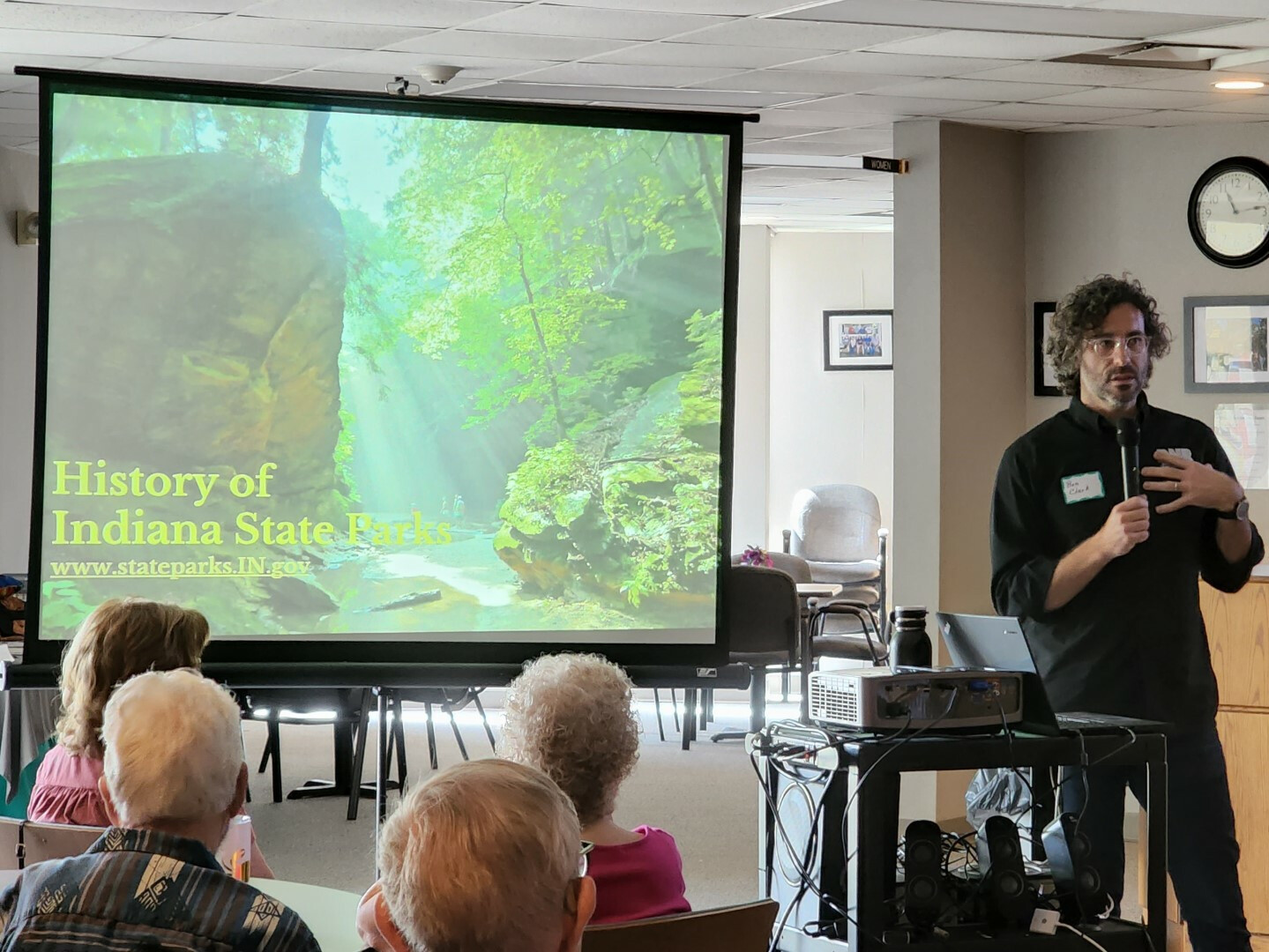 A hot summer day did not wilt the attendance for the June Lunch & Learn to hear Mr. Benjamin Clark, Chief of Indiana Department of Natural Resources (DNR) Cultural Resource Division. His topic was the history of the Civilian Conservation Corps and the Indiana State Parks.

Ben emphasized the DNR’s commitment to stewardship of the state parks not only physically but historically. He mentioned Richard Lieber, a German immigrant with family ties to the Vonnegut family, as generally referred to as the “Father of the State Parks”. The park system was initiated by Mr. Lieber in 1916. In Indiana the park at McCormick’s Creek near Spencer, IN was the first in the state in 1916.

Ben began an overview of the Indiana parks beginning with the era of Native Americans before colonization. The site of Mounds State Park in Anderson, IN is an example of this time period. After colonization, the tribal land of the Potawatomi Indians became Pokagon State Park in northern Indiana. He displayed a map of the Miami Indian sites along the Wabash River and noted several state parks sites that overlap similar areas. After the American Revolution, George Rogers Clark was paid in land as the nation had no cash to repay soldiers who used personal funds in the conflict. The subsequent Pioneer Period developed Potato Creek State Park in northern Indiana. The nearby Porter-Ray cemetery has mixed race internments which was unusual for that time. Moving to the Civil War era, Ben displayed a map of southern Indiana tracing the path of the Confederacy’s Morgan’s Raiders culminating in the Battle of Corydon as they moved into Ohio. He identified the Progressive era as the late 19th century. The Lusk home in the area that is now Turky Run State Park was up for sale. The state wanted it for the land but lost it in auction to the Hoosier Veneer Company. The state was able to buy the property back from Hoosier Veneer thus obtaining the land for Turkey Rund State Park where Canyon Inn was built. The state park effort at the time was bolstered by Juliet Strauss, often referred to as the “Mother of State Parks”. 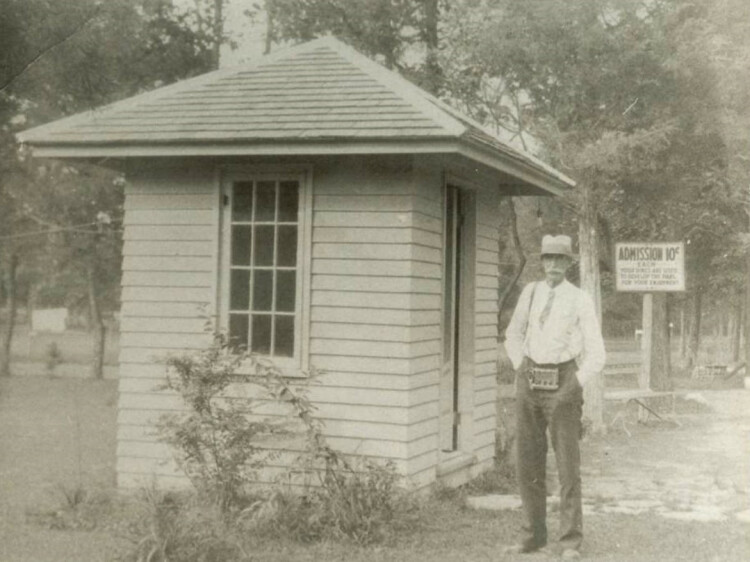 Ben stated that 90% of the state park system operation is self-funded through gate admissions and usage fees. He had an interesting photo of Mr. James Jacob, the first gatekeeper. Admission was ten cents in 1916 and adjusted for inflation the current gate fee is very comparable.

Clifty Inn at Madison, IN was the third state park followed by Dunes, Potawatomi Inn at Pokagon, Spring Mills in 1927, and the Abe Martin Lodge in Brown County State Park in 1929. Charlestown State Park, west of Madison, IN, was added in 1996 on property that was part of land of a vacated U.S. Army Ammunition plant. The following sentences were not a part of Ben’s presentation, but a personal experience. Near the Charlestown State Park is property that was on an amusement park in the 1920’s and 1930’s known as Rose Island. The park was inundated by an Ohio River flood in 1937. Building foundations and marked areas exist today outlining the boat landing, cottages, hotel, dance hall, swimming poos, zoo, bear pit, etc. The only way to see these remnants is a walking trail that drops 70 vertical feet in 2,000 horizontal feet. Going down was easy; coming back up was tortuous — trust me.

The presidency of Franklin Delano Roosevelt initiated the “New Deal” which developed the Civilian Conservation Corps (CCC) to put men 18 to 25 years of age to work. They were housed in barracks at the work sites and were paid $30.00 per month. Each man could keep $5.00 and the remaining $25.00 was sent to his family. The camps were intended to be integrated but unfortunately, they did become segregated. Ben had several photos depicting this. The men had access to library facilities and athletic opportunities in the free time. 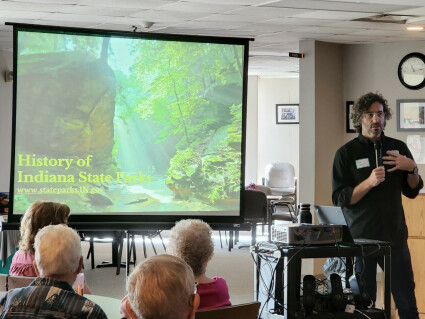 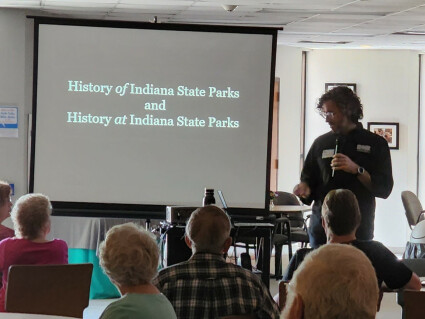 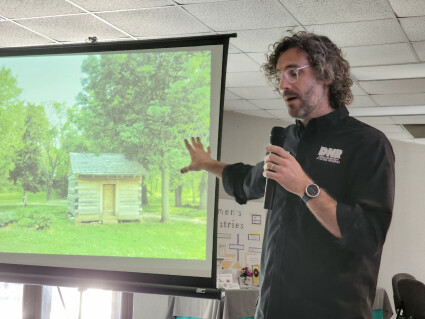 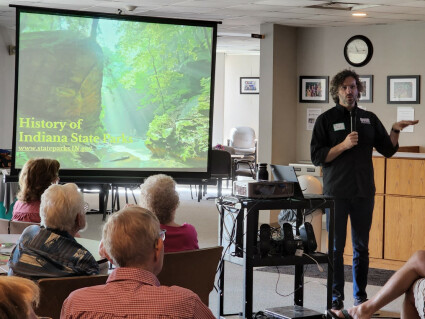 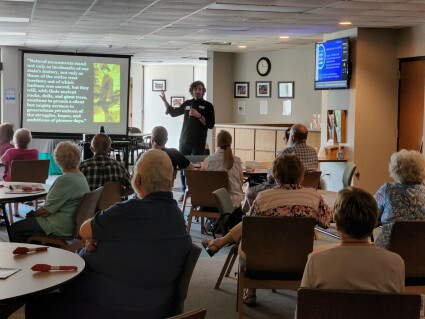